Home » GENERA M-O » Metalasia » Metalasia densa
Back to Category Overview
Total images in all categories: 10,856
Total number of hits on all images: 5,516,186 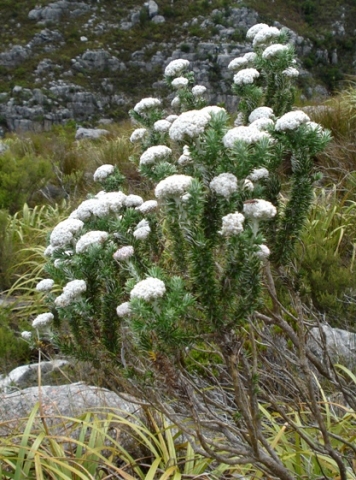 Metalasia densa is a branched, woody shrub that commonly reaches heights around 2,5 m, rarely 4 m. It sometimes sprouts after fire.

The species distribution lies in a broad coastal strip from Namaqualand in the Northern Cape along the south coast and Little Karoo of the Western Cape, across the Eastern Cape and inland to the Free State, KwaZulu-Natal and Lesotho. It is also found across the Vaal River in Mpumalanga and as far as Limpopo around the Soutpansberg, but not in the arid northwest and centre of the country.

The habitat includes fynbos, coastal and other scrubland in sandy or loam soils on flats and slopes. The species is not considered to be threatened in its habitat early in the twenty first century.