Home » GENERA M-O » Metalasia » Metalasia fastigiata
Back to Category Overview
Total images in all categories: 10,856
Total number of hits on all images: 5,516,180 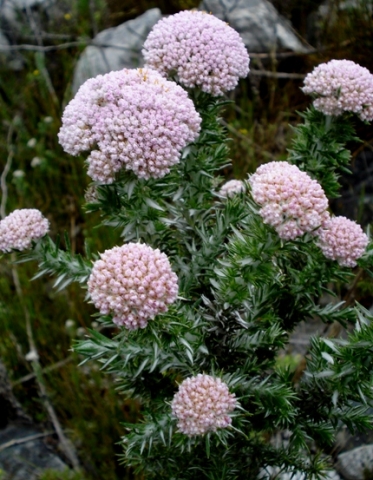 Metalasia fastigiata is a branched, rounded shrub growing erect branches to 1,5 m. Its leaves are needle-like, twisted and flexed down. Younger leaves grow in tufts from primary leaf axils. The leaf margins are rolled upwards, white and woolly in the resultant groove.

Small discoid flowerheads, each made up of about five flowers, grow at stem tips in clusters of up to 2,5 cm in diameter. The bracts around the flowerheads are pink, the inner ones petal-like. Flowering happens from late winter through spring.

The distribution in the southwestern Cape ranges from Nieuwoudtville and Calvinia to Piketberg and Wellington. The habitat is fynbos in sandy soils at elevations between 700 m to 1100 m. The species is not considered to be threatened in its habitat early in the twenty first century.

This photo was taken in October in Bainskloof of a pale-flowering specimen, its leaves showing much white (Manning, 2007; Manning and Goldblatt, 1997; www.redlist.sanbi.org).