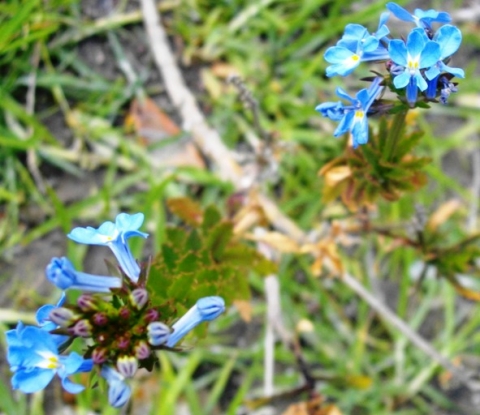 Lobelia valida, the galjoenblom in Afrikaans, earned this colloquial name of a well-liked fish on the southern Cape coast, because it flowers in the same months as the galjoen fishing season, viz. November to April.

There are possibly 400 species of Lobelia worldwide. One was introduced into Hawaii naturally from Asia as long as 15 million years ago. Something that cannot be blamed on humanity! But people are often quite interested in growing the many blue Lobelias, some of which occur in the southern African veld.

The galjoenblom is endemic to the coastal hills of the Agulhas Plain which lies on the southern coast of South Africa from Bredasdorp to Riversdale. The plant has erect stems with flowers clustering at the top of them and overlapping obovate leaves with toothed edges. The flowers are two-lipped: the upper lip has two small petals and the lower one three with white and yellow markings at the base. This plant is a widely recognized garden subject (Wikipedia; www.plantzafrica.com).