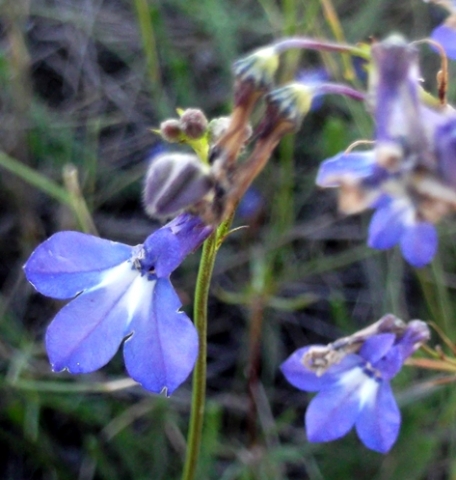 Lobelia setacea is a tufted perennial, erect or sprawling, from 15 cm to 60 cm tall. The stems have a sparsely branched, broom-like aspect. Buds, flowers and developing capsules are all present on the plant in the photo.

The species is distributed in the southern parts of the Western Cape, coastally from the Peninsula to the southern Cape and inland around Worcester and the Langeberg Mountains.

The habitat is flats and sandy slopes, often in fynbos. The species is not considered to be threatened in its habitat early in the twenty first century (Manning, 2007; Mustart, et al, 1997; Bean and Johns, 2005; Bond and Goldblatt, 1984; iSpot; www.redlist.sanbi.org).