Home » GENERA G-H » Glottiphyllum » Glottiphyllum regium leaves
Back to Category Overview
Total images in all categories: 10,853
Total number of hits on all images: 5,503,417 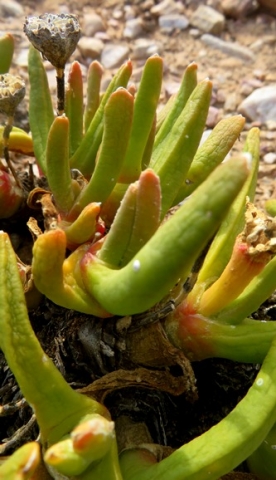 The shape of these Glottiphyllum regium leaves tends to be more angular than terete (cylindrical), particularly with respect to their margins, not the keels. The leaves are erect, about straight to slightly incurved and fused in similar pairs at the base. The leaf tips are mainly rounded to variously pointed.

Yellow-green leaf colour predominates; faint hints of orange inclined to red are seen mainly at some tips. Some dry leaf remains on stem bases are visible on this old plant, as its stems are slightly further separated than in young, densely clumped ones.

The large, dry capsule in picture has a deltoid base and longer, thinner stalk than the younger, fleshy one that is still underdeveloped on a thicker, shorter stalk (Smith, et al, 2017; Frandsen, 2017; iNaturalist).