Home » GENERA D » Disperis » Disperis virginalis
Back to Category Overview
Total images in all categories: 11,131
Total number of hits on all images: 5,810,348 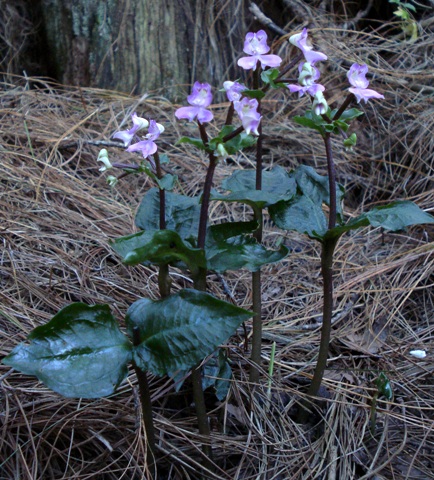 Disperis virginalis is a terrestrial orchid, a slender perennial rarely reaching 25 cm in height. Two sessile, broadly ovate stem leaves that taper to acute tips are borne nearly opposite each other. They are glabrous, dark green and shiny in the photo. Their closely spaced lateral veins are about parallel and angled slightly upwards from the midrib to the margins that are entire. These leaves become anything from 2 cm to 7,5 cm long.

The species distribution is in the north of South Africa, around the centre of the province of Limpopo, as well as in the eastern reaches of Zimbabwe. The natural habitat of D. virginalis is shaded floors of montane evergreen forest at elevations between 1500 m and 1950 m.

Pine plantations, such as where the plants in picture grow, add to the distribution of the species, contrary to the habitat destruction that commonly ensues from human development. These plants may also be found growing on mossy rocks in forest, adding an option to their terrestrial adaptation.

The species is not considered threatened in its habitat early in the twenty first century (www.zimbabweflora.co.zw; www.orchidspecies.com; www.redlist.sanbi.org).