Home » GENERA C » Cassine » Cassine peragua leaves and fruit
Back to Category Overview
Total images in all categories: 11,037
Total number of hits on all images: 5,688,387 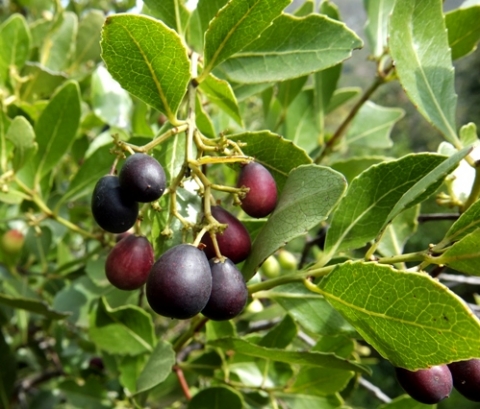 The opposite, very variable leaves of Cassine peragua, some shown here draped around some ripe or ripening fruit, are broadly elliptic, sometimes ovate or almost circular on short petioles. The leaf tip is rounded, tapering, sometimes notched. The leaf base tapers or is rounded. The leaf margins are toothed in their upper parts, the teeth having hard tips.

Leaves are leathery with prominent net-veining on both surfaces, but paler on the lower surface and translucent against the light. This translucence is an identification aid to separate the tree from Hartogiella schinoides that has leaves with obscure veining lacking translucence.

Tiny, dry stipules grow beside the petiole base. Catha abbottii found in southern KwaZulu-Natal and Pondoland has large leaf stipules connected at the base between the leaf petioles.