Home » GENERA C » Cassine » Cassine peragua
Back to Category Overview
Total images in all categories: 11,037
Total number of hits on all images: 5,688,182 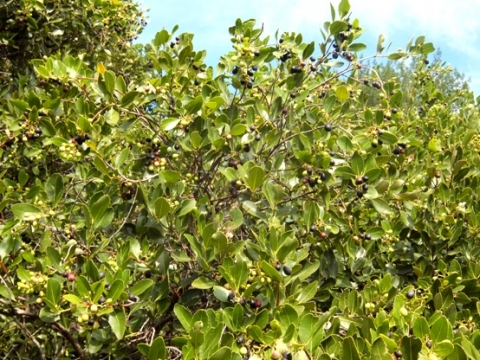 There are three subspecies:

Subsp. peragua, the forest spoonwood, is the tall one reaching heights around 15 m, found from the Limpopo and Mpumalanga Lowveld to the east and south coast, from KwaZulu-Natal and the Eastern Cape to the Western Cape.

Subsp. barbara, the dune spoonwood, only grows coastally in the Western Cape from Langebaan to Stilbaai to heights around 2 m, stunted and multistemmed, sometimes rhizomatous on coastal dunes and associated fynbos.

Subsp. affinis, the Bokkeveld spoonwood, grows to 5 m in the Western and Northern Cape, known along watercourses in places including Calvinia and the Cederberg.

The latter two subspecies are South African endemics, while subsp. peragua distribution extends to the forests of neighbouring countries in the tropical northeast.

The habitat is diverse, particularly for the three subspecies that made very different adaptations, notably tropical, Mediterranean and the semi-arid west coast. Forests, coastal and montane, their margins, riverine bush and some coastal dune scrub all feature. None of the three subspecies of C. peragua is considered to be threatened in habitat early in the twenty first century (Coates Palgrave, 2002; Schmidt, et al, 2002; Van Wyk and Van Wyk, 1997; http://redlist.sanbi.org).