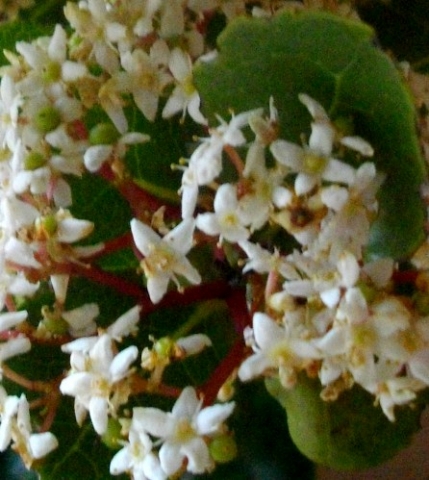 The three subspecies of Cassine peragua are distinguished on tree shape, bark and leaf features; not much on flower differences. So, these C. peragua subsp. peragua flowers should resemble the flowers of all three plants.

Subsp. peragua blooms from the end of summer to midwinter in the winter rainfall parts of its South African distribution, only in about the latter half of winter in the summer rainfall region. The photo is from Fernkloof in May.

The cream to white flowers are fragrant. They seem to have limited free choice as to the number of petals they wear at bloomtime: some have four, others five. If the five-petal club has a fifth stamen, they could claim superiority in reproductive effectiveness but with so much production going on, this behaviour extension into the lesser parts of human mentality must be totally lost on well-behaved plant parts.

The spreading petals have margins that curl back so inconsistently that some appear oblong, others triangular. There are petals with rounded tips while other tips are pointed or square. Individual differences in plants do not translate to freedom of choice. Some micro- or nano-conditions in physical details within the range of species characteristics result in these phenomena.

The conspicuous stamens spread over the gaps between the petals, initially angled up, later sagging into those gaps. The small, globose anthers are beige in colour at the tips of their more or less straight white filaments. That is, before they sink, tired and dysfunctional (Coates Palgrave, 2002; Schmidt, et al, 2002; iNaturalist).