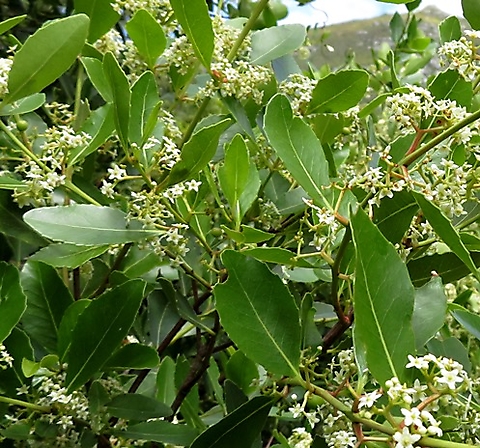 Cassine is a genus of slender or tall evergreen trees in the Celastraceae or spike-thorn family. Some of the plants only reach shrub size or are suffrutices.

The leaves are opposite or rarely subopposite with tiny triangular stipules that turn brown early but often persist. The leaves are without elastic threads when snapped and slowly pulled apart.

The axillary, cyme-shaped inflorescences may be stalked. The stalked flowers are usually bisexual. There are four or five equal sepals varying in shape from triangular to ovate or nearly circular, their margins ciliate or lobed. The four or five spreading petals of the radially symmetrical flowers are cream or white, oblong or elliptic. There is a fleshy disc in the flower base, round or lobed.

The four or five spreading or erect stamens arise from the disc margin. The superior ovary is upon or immersed in the disc. It consists of two or three locules with two ovules per locule. The style is short or absent, the stigma usually two- or three-lobed.

The fruit is berry-like and about spherical, fleshy or leathery. It is brown to dark brown and does not burst open (dehisce) when ripe. Fruit diameter is usually around 1 cm. The usually one or two seeds per fruit are spheroid or ellipsoid, brown with a fleshy endosperm present and without a stony wall.

There are three species, all endemic to southern Africa.