Home » GENERA A » Aloidendron » Aloidendron pillansii
Back to Category Overview
Total images in all categories: 11,401
Total number of hits on all images: 6,175,223 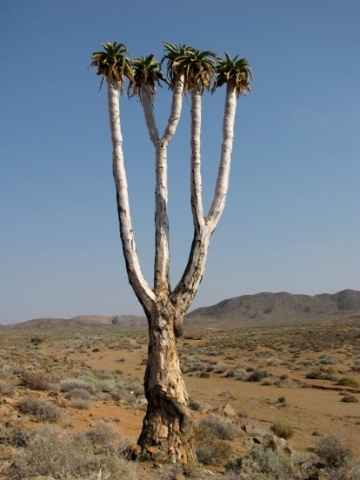 Aloidendron pillansii, the giant quiver tree and until recently Aloe pillansii, carries its few big bare branches in an erect and stately manner to heights around 10 m (SA Tree List No. 30).

The rosettes of grey-green to blue-green leaves crown the stem-tips and clasp them, while dead leaves fall early. The whitish, pale grey or creamy brown bark is smooth higher up, coarse lower down, where the stem broadens notably close to the ground.

The inflorescence is much branched, emerging from among the lower leaves on the rosette in horizontal or angled down positions. Each raceme in the panicle is about cylindrical, the perianths yellow, swollen in the centre and tinged green at their segment tips.

The remote, Northern Cape and Namibian distribution range of A. pillansii has been aptly described by Van Wyk and Smith (2003): from Cornell’s Kop in the Richtersveld to the Brandberg in Namibia, at altitudes between 250 m and 100 m.

The habitat is succulent Karoo type stony, often sandy land with mostly low shrub and succulent vegetation that accentuates the height of the A. pillansii trees. The range-restricted species is considered to be endangered in its habitat early in the twenty first century, due to mining, stock farming, plant collection and climate change.

The seed germinates easily, but the plant does not relish habitats different from home conditions (Coates Palgrave, 2002; Jeppe, 1969; http://redlist.sanbi.org).