Home » GENERA A » Aloidendron » Aloidendron dichotomum leaf departure
Back to Category Overview
Total images in all categories: 11,632
Total number of hits on all images: 6,749,194 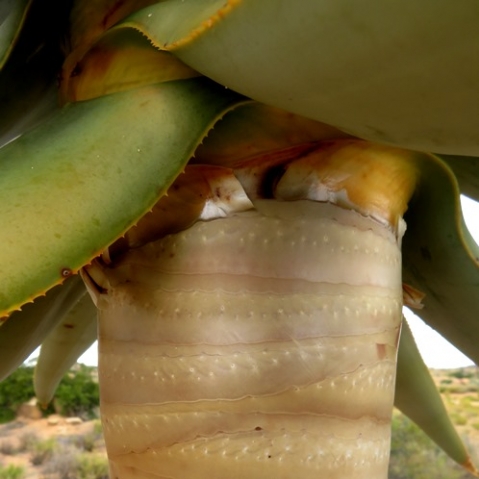 Distinctive lines and spots mark the upper Aloidendron dichotomum stem part from which the most recent old leaf departures have taken place. The leaf base skin breaks, leaving a fine ridge around the stem where the continuous surface between stem and leaf was severed.

Maybe the white spots in picture indicate where the vascular connections between stem and leaf became disconnected while the leaf dried and lost its grip. Such a process is continuous, part of growing, punctuated by periodic leaf falls. The early stages of parting have already started in the lowest leaf still in position, as the flow of juices reduce in favour of young leaves near the stem-tip above.