Home » GENERA A » Aloidendron » Aloidendron dichotomum, a proud moment
Back to Category Overview
Total images in all categories: 11,632
Total number of hits on all images: 6,749,056 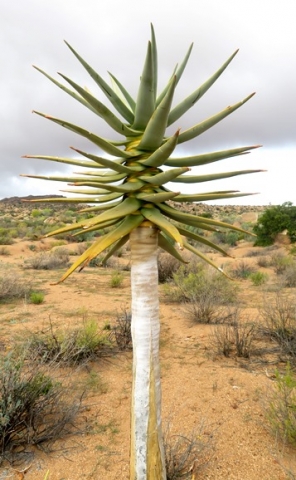 Before the first Aloidendron dichotomum branching, the ambitious, first and only stem-tip may carry about double the twenty-odd leaves normally produced at a stem-tip of an old, much-branched tree. Such branching will be dichotomous or equal, the two branches angled equally from the stem direction immediately below are of similar shape and size.

Young, but around for a long time at the threshold of maturation, many leaves have already been discarded below from the long smooth stem. The lowermost ones still holding on are sagging and yellowing, sure body language signs of pending departure.

In comparatively favourable conditions, this plant sets the scene early for greater growth in the future. Resources are currently sufficient for deploying a vigorous launch of frame and roots. This will later sustain numerous stem-tip growth points simultaneously in the mature tree to come, many years from now.