Home » GENERA A » Aloidendron » Aloidendron ramosissimum
Back to Category Overview
Total images in all categories: 11,632
Total number of hits on all images: 6,749,141 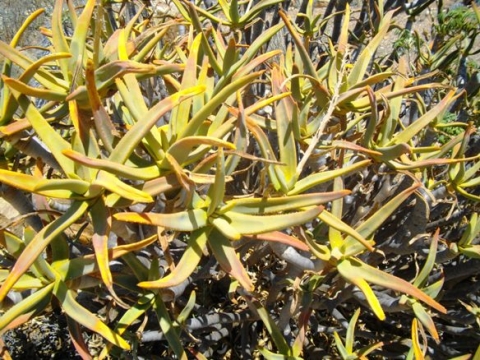 Aloidendron ramosissimum, commonly the maiden's quiver tree and in Afrikaans the nooienskokerboom (girls' quiver tree), is a tree aloe reaching heights around 2m to 3 m (SA Tree List No. 30.2).

Its stems branch repeatedly by dividing rosettes until the plant appearance is that of a dense, somewhat rounded shrub covered in many bluish-green or yellow-green finger-like leaves. There are small brown teeth on the leaf margins. Stems lose old leaves and become smooth over time. They are covered in a waxy bloom.

The species distribution is in the Richtersveld and southern Namibia.

The habitat is arid, rocky hills, the plants growing in sandy soil. The terrain has an average (winter) rainfall of 110 mm per annum with no rain in some years. Temperatures reach 46˚ C. The range-restricted species is considered to be threatened in its habitat early in the twenty first century, due to habitat loss mainly due to trampling by uncontrolled livestock.

This plant is not known for medicinal applications like so many other local species, but young flower shoots are sometimes eaten. The taste is said to resemble that of asparagus (Wikipedia; www.plantzafrica.com; http://redlist.sanbi.org).