Home » GENERA B-C » Cyphia » Cyphia volubilis
Back to Category Overview
Total images in all categories: 9,180
Total number of hits on all images: 4,099,369 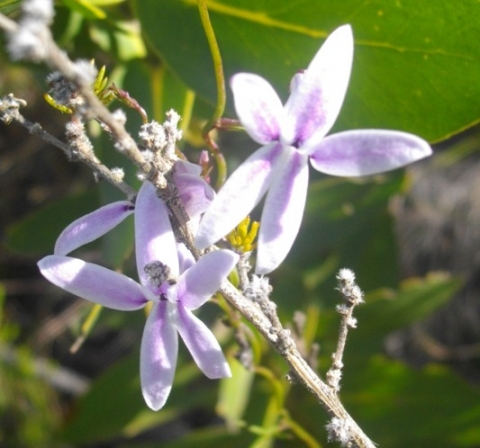 The baroe or waterbaroe, botanically known as Cyphia volubilis, gets its common name from the Khoi people who used to dig up the edible tuber. The inconspicuous climber stems grow from a potato-like tuber that contains a watery juice. Tubers are peeled and eaten raw, fried or baked. The plant used to be a staple food as well as a thirst-quencher (Van Wyk and Gericke, 2000).

The flower in picture shows a little touch of purple. It was photographed in September on a mountain slope near Greyton where some other specimens had pure white flowers. Some forms of the plant, such as the specimen depicted in the Klein Karoo book by Vlok and Schutte-Vlok (2010) have a uniform pinkish purple colour of the corolla.