Home » GENERA B-C » Cyphia » Cyphia longifolia
Back to Category Overview
Total images in all categories: 9,395
Total number of hits on all images: 4,220,027 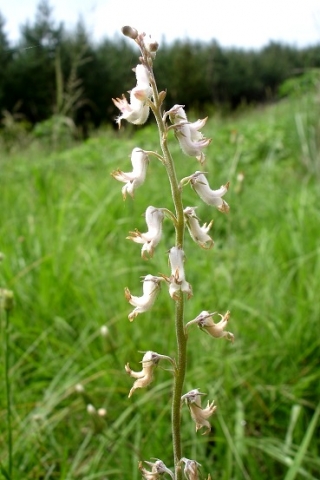 Cyphia longifolia, the seaslug baroe, is a slender herb that grows from a tuber. Many South African Cyphia plants are called baroe, a name handed down from early indigenous Khoi people who dug the tubers up for food. The water stored in a baroe could also quench thirst if one knew which plant would yield it. The seaslug baroe tuber probably has a shape that earned such a name. The leaves, growing on slender stems, are narrowly oblong or linear.

The plant grows in grassland or open scrubland. The distribution area of this Cyphia species lies in the Eastern Cape and KwaZulu-Natal. This photo was taken in the south of KwaZulu-Natal during November.

The plant is believed to have a stable population in nature early in the twenty first century (www.redlist.sanbi.org; iSpot; Smith and Gericke, 2000).