Home » GENERA B-C » Cyphia » Cyphia volubilis
Back to Category Overview
Total images in all categories: 8,940
Total number of hits on all images: 3,959,815 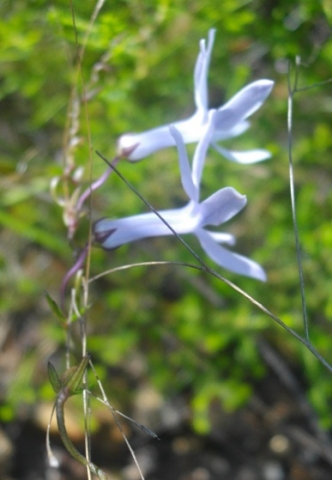 Cyphia volubilis is found from Namaqualand along the south coast of South Africa as well as inland along the Little Karoo eastwards to around Port Elizabeth. The species grows on sandstone and clayey slopes. Namaqualand is home to several baroe species such as C. sylvatica and C. undulata that are (or were) important in the diets of indigenous people.

The Cyphia genus forms part of the Campanulaceae or bellflower family. It was classified under Lobeliaceae at some stage in the past.

The picture provided here shows the long narrow flower tube and the small, dark, pointed sepals of the calyx (Vlok and Schutte-Vlok, 2010; Manning, 2009).