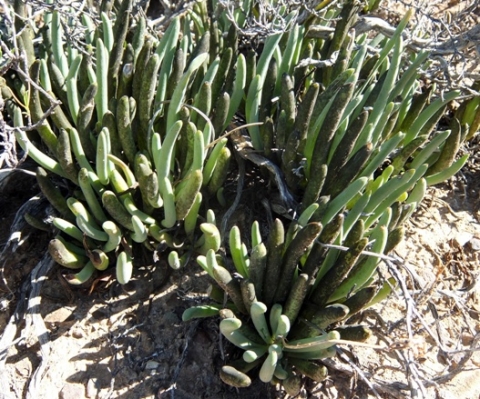 Curio acaulis is a perennial leaf succulent, stemless as the specific name indicates (caulis a stalk in Latin, the prefix a- indicating the absence of). The plant reaches 30 cm in height when the solitary flowerheads on their smooth pinkish scapes are presented in spring, well above the leaves.

The distribution of this plant ranges from around Ceres in the Western Cape to the Kouga Mountains in the Eastern Cape. The habitat is rocky outcrops in clay soils among various vegetation types. The species is not considered to be threatened in its habitat early in the twenty first century (Vlok and Schutte-Vlok, 2010; http://redlist.sanbi.org).