Home » GENERA C » Curio » Curio acaulis flowerhead
Back to Category Overview
Total images in all categories: 10,175
Total number of hits on all images: 4,839,689 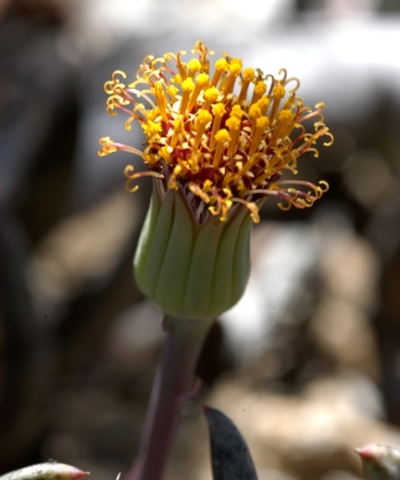 A Curio acaulis flowerhead has a single row of bracts forming its cylindrical involucre. The bracts are neatly joined to each other apart from near the top where they may part, giving the disc florets some blooming space. The flowerhead of 1 cm in diameter lacks ray florets.

The florets are dull maroon on the outside surfaces of the five pointed corolla lobes, whitish within. These lobes just taller than the tips of the involucral bracts are well below the stamen and style tips in picture.

The stamens are notably erect, their sturdy filaments having a khaki colour, topped by bright yellow anthers. The curving styles are pale, touched with pink and some translucence, each with two curling stigma branches at its tip. It seems as if there are not many styles among the stamens, all bent on visiting hours (Vlok and Schutte-Vlok, 2010).