Home » GENERA C » Curio » Curio articulatus in summer without leaves
Back to Category Overview
Total images in all categories: 10,164
Total number of hits on all images: 4,829,209

Curio articulatus in summer without leaves 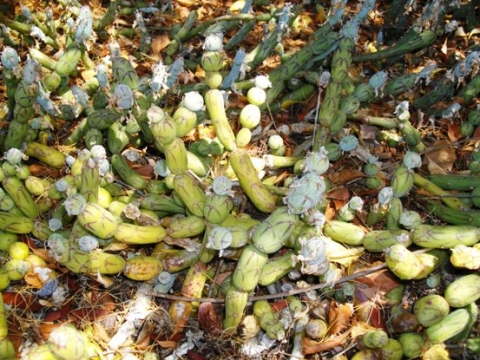 Curio articulatus, known in Afrikaans among other things as worsies (little sausages) and the sosatieplakkie, grows in the Little Karoo and southwards along the Gouritz River past the Langeberg Mountains into the semi-arid area near Mossel Bay; also eastwards into the Eastern Cape as far as Uitenhage.

The green succulent stem segments look like a string of little sausages or large beads, caused by the intermittent constrictions separating them. These grey-green stems have purplish markings resembling crow’s feet or M-shaped McDonald’s logos spread over them. On the next plant the markings may be different, even more prevalent or completely absent.

This plant is established in horticulture as a rockery and container item. Sections of the stems can be separated and planted as cuttings (www.mercurynews.com).