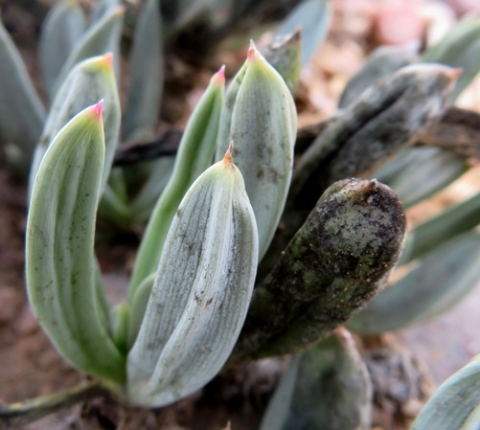 The Curio genus consists of about 20 species of leaf-succulents forming part of the Asteraceae or daisy family; and the Asteroideae subfamily. The plants bear discoid flowerheads and roughly cylindrical, sometimes curving leaves. There are stemless Curio species, some erect and others prostrate. Even species with “windows” in the succulent leaves, allowing sunlight to enter for photosynthesis in cells against the inside walls.

Up to 1997 all the Curio species formed part of the Senecio genus, some of them still earlier in Kleinia. Such changes reflect increased understanding of relationships among and evolution of different plants, in recent times the knowledge greatly enhanced by phylogenetic studies involving DNA.

The generic name is derived from the Latin word curiosus meaning curious, maybe referring to a feature of plant shape. What is commonplace to some may be curious to others; familiarity takes time.

This photo shows a plant that has been through the drought wars of attrition near Calitzdorp. The leaf surfaces bear longitudinal vein lines and are covered in a whitish bloom; that is where they are not discoloured by black lichen. There are tiny, brown mucros at the leaf-tips. The sunken channels on the still succulent, curved and erect leaves might fill out after the next rain. Waiting for that was too much to ask, so the photo was taken as is.

There are 14 Curio species in South Africa, some with recognised varieties in nature. A guess that this may be Curio acaulis remains only that (Vlok and Schutte-Vlok,2015; Wikipedia; http://pza.sanbi.org; http://redlist.sanbi.org).