Home » GENERA B-C » Crassothonna » Crassothonna alba
Back to Category Overview
Total images in all categories: 9,141
Total number of hits on all images: 4,084,871 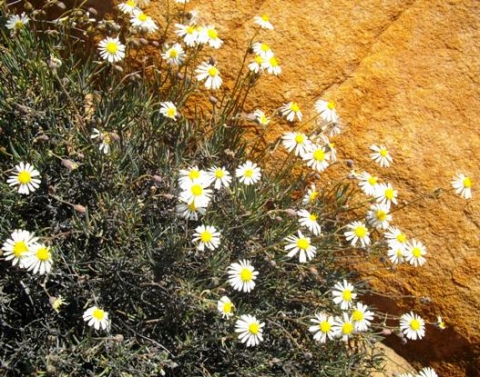 The new genus Crassothonna was created in 2012, comprising 13 species of Othonna perennial herbs, shrublets and shrubs of mainly the Western Cape and Namaqualand, a few from the rest of the country and southern Namibia.

C. alba resembles C. cylindrica and C. cacalioides but has white ray florets, (rather than yellow ones as the other two do).

The species distribution is in the western Karoo around the Cederberg and the Witteberg into the west of the Little Karoo, where the plant grows in semi-arid, winter rainfall conditions.

This plant was seen near Kagga Kamma, flowering in September in sandy soil. It is also found in loamy soils where land has been disturbed. The species is not considered to be threatened in its habitat early in the twenty first century (Compositae Newsletter, 50, 2012; Vlok and Schutte-Vlok, 2010; Bond and Goldblatt, 1984; www.redlist.sanbi.org).