Home » GENERA B-C » Crassothonna » Crassothonna cylindrica
Back to Category Overview
Total images in all categories: 9,840
Total number of hits on all images: 4,472,939 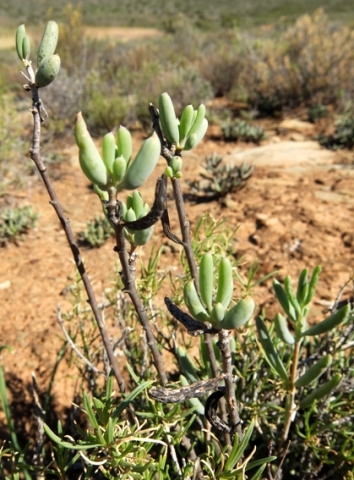 Previous
Image 7 of 20
Next

Crassothonna cylindrica, one of several species called bobbejaankool (baboon cabbage) in Afrikaans, sometimes also dikblaar (thick leaf), is a loosely branched and brittle-stemmed shrub of up to 1 m in height.

The species distribution is wide, from Namaqualand to the Eastern Cape. The plant grows among gravel in sandy or loamy soils in a diverse range of veld types.

Nobody can become familiar with all the Asteraceae or daisy plants growing on earth. People do not live that long. There are about 20 000 species grouped in 1 100 genera to meet, each with its own set of characteristics. All the family members grow flowerheads of a number of disc and or ray florets above involucres of bracts. Until 2012 C. cylindrica was called Othonna cylindrica, until this new genus was created.

Changing challenges bring further differentiation in the family through speciation, the splitting of species as conditions prompt self-inventing survival reactions, expanding diversity in the daisy community on earth.

As far as we know no earthly daisies wonder (yet) about other daisy communities on planets elsewhere in the Milky Way or further away among (for us) inaccessible galaxies.

Their chances of making it to Mars with the first human colonists from earth are not great, as food plants will be considered first. Who knows how important flowers will be to the wellbeing of people never returning to earth?

People are more inclined to moving forward and meeting challenges like conquering space, rather than moving backwards by curbing their own excessive population numbers (Vlok and Schutte-Vlok, 2010; Bond and Goldblatt, 1984; Wikipedia).