Home » GENERA C » Crassothonna » Crassothonna capensis
Back to Category Overview
Total images in all categories: 10,212
Total number of hits on all images: 4,867,290 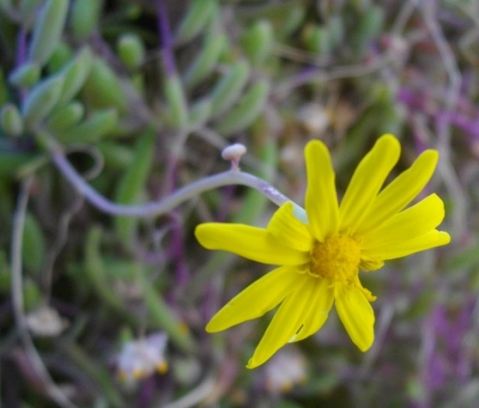 Previous
Image 3 of 21
Next

Crassothonna capensis is a spreading succulent with yellow flowers. It was moved from the Othonna genus to Crassothonna in 2012.

The flower in the photo found in Kirstenbosch during November has about a dozen petals and a yellow centre. The plant branches freely and has cylindrical succulent grey leaves.

The distribution of this South African endemic is in the Eastern Cape only, found near the coast as far east as Uitenhage.

The habitat is dry rocky flats. The species is not considered to be threatened in its habitat early in the twenty first century (Bond and Goldblatt, 1984; www.finegardening.com; http://redlist.sanbi.org).