Home » GENERA C » Crassothonna » Crassothonna cylindrica flowerhead
Back to Category Overview
Total images in all categories: 10,169
Total number of hits on all images: 4,831,529 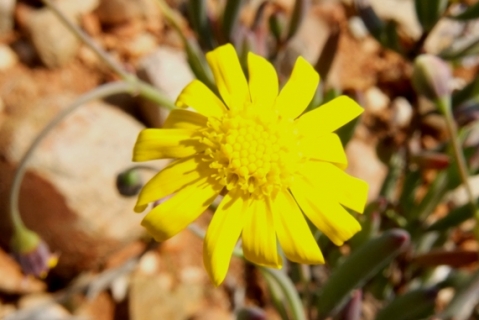 The flowerheads of Crassothonna cylindrica are borne solitary or in a little-branched inflorescence, on long peduncles that emerge from leaf axils. The flowerhead has one row of oblong ray florets and a central disc of many tiny disc florets; both flower types of the heads are bright yellow. Flowerhead diameter is about 1,5 cm.

Only some florets in the outer rings of the disc have opened yet in the flowerhead in picture. Their five pointed lobes spread while the dots representing closed buds in the centre remind of a honeycomb pattern.