Home » GENERA B-C » Crassula » Crassula cotyledonis in greyness
Back to Category Overview
Total images in all categories: 8,984
Total number of hits on all images: 3,986,577 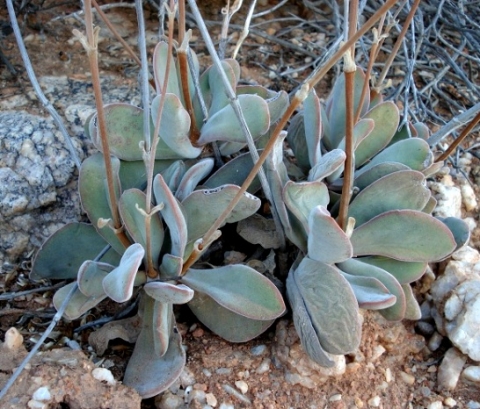 The greyness of the leaf colour on this Crassula cotyledonis plant is a salient feature in the photo, as is the characteristic leaf shape. The faint reddish touch on some of the leaf margins fairly common to the species is present. The occasional pairs of tiny opposite leaves still clasping the flower stalks are drying out as flowering is over. Leaves are already losing moisture in the onset of the dry season.

The velvety leaf surface texture can be imagined, seen if suspected. Human suggestibility, the tendency to accept suggestions into belief of confirmed own observation, is but one of the problems of science and living in general. It has been said that there is nothing as unreliable as the eyewitness! We may become convinced, followed by the brain telling us we saw something, even if it wasn’t there! Not all unreliable witnesses under oath are liars.

Cross-checking by repetition and consensus in community dialogue with common purpose helps scientific observation over obstacles. We need not despair like the Greek philosophers over the risk of illusion: What can be seen can’t be believed; what can be believed can’t be seen! The next step must be taken, yet it is the final answer only temporarily.