Home » GENERA B-C » Crassula » Crassula cotyledonis
Back to Category Overview
Total images in all categories: 8,941
Total number of hits on all images: 3,961,356 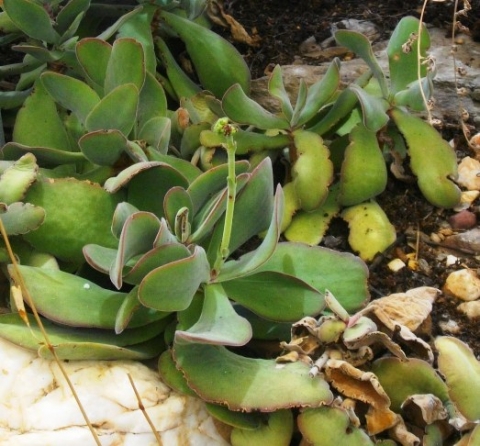 The bergplakkie or Crassula cotyledonis is a small leaf succulent reaching heights around 20 cm when flowering. The leaves are succulent and paddle-shaped, tapering towards the base and rounded at the tip. Leaf surfaces are grey-green and velvety covered in short hairs. The margins are entire, often reddish to purple in colour.

Flower stalks reach 20 cm in height. Small cream to greenish flowers appear in spaced compact clusters along the stalk in spring to summer.

The species is widely distributed, from the Namibian side of the Gariep River, Namaqualand and the western Karoo to the Little Karoo and into the Eastern Cape. Is this distribution continuous? How big may the spaces between colonies of the plants be to still confirm that?

Growing in rocky and stony places in clayey soils, the plant is adapted to arid or semi-arid conditions, the mainly winter rainfall often low in these parts. The plants withstand some cold, often growing in the shade of shrubs. The species is not considered to be threatened in its habitat early in the twenty first century (Vlok and Schutte-Vlok, 2010; www.redlist.sanbi.org).