Home » GENERA B-C » Crassula » Crassula corallina
Back to Category Overview
Total images in all categories: 8,941
Total number of hits on all images: 3,961,392 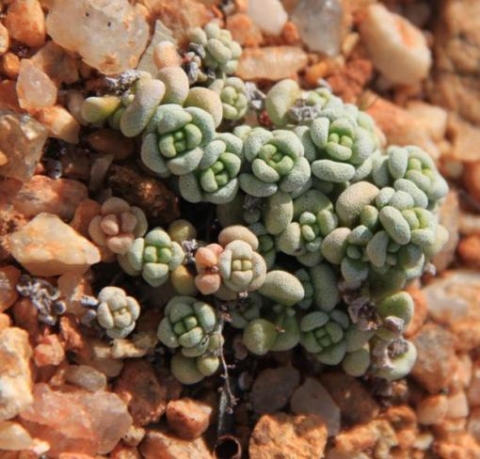 Crassula corallina, the coral crassula or in Afrikaans hasieskos (rabbit’s food), is found in the far northwest of South Africa. Coral may be the last substance one would expect in this white flowered and white leaved plant’s desert-like habitat, but the association has been formed. The area reaches as far east as the Free State, north as Namibia and south as the Karoo. Both subspecies of the plant, viz. C. corallina subsp. macrorrhiza and C. corallina subs. corallina grow in the Richtersveld. This photo was taken in Namaqualand and is probably C. corallina subsp. corallina.

The plant spreads, forming a dense mat that may assist in retaining moisture longer around its own tuberous underground reservoir. Branching results in a clump of chubby looking rosettes formed by successive leaf pairs, like little faces protected by consecutive sets of earmuffs. As if the terrain was cold and snowy instead of excruciatingly hot in its blooming season.