Home » TYPES » Trees » Trema orientalis
Back to Category Overview
Total images in all categories: 11,523
Total number of hits on all images: 6,599,392 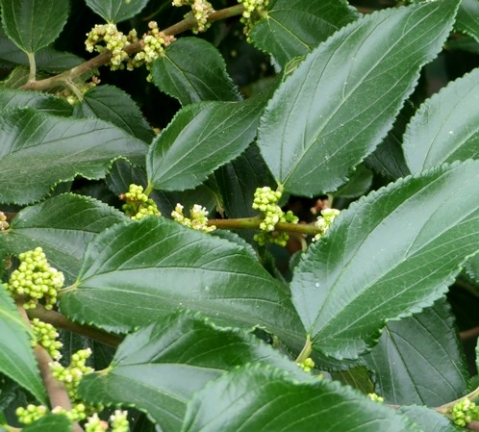 Trema orientalis, commonly known as pigeonwood and in Afrikaans as hophout, is a shrub or medium-sized, deciduous tree that reaches heights from 5 m to 13 m (SA Tree List No. 42).

The tree resembles Celtis africana, commonly known as white stinkwood, another species of the Ulmaceae, previously the Celtidaceae family. T. orientalis is the only member of its genus occurring in South Africa.

The species distribution is in the east and northeast of South Africa from the Eastern Cape, KwaZulu-Natal, Mpumalanga, Limpopo, Gauteng and North West, as well as elsewhere in tropical Africa and Asia. The specific name, orientalis, is derived from the Latin word oriens meaning rising as of the sun, referring to the easterly distribution of the species.

The habitat includes both moist forest margins or riverine thickets and dry riverbeds or bushveld valleys where the growth is smaller. The trees thrive on moisture and in slightly acid soils. The tree is a rapid growing pioneer species often appearing soon in areas where the soil has been disturbed. The species is not considered to be threatened in its habitat early in the twenty first century.