Home » TYPES » Trees » Trichilia emetica bark and label
Back to Category Overview
Total images in all categories: 11,901
Total number of hits on all images: 7,141,729 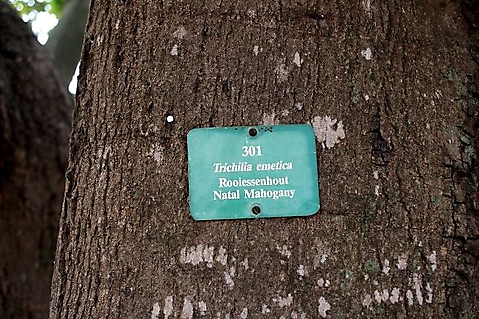 The bark of Trichilia emetica subsp. emetica is pale to dark grey-brown. It is shallowly fissured, becoming somewhat rough with age from cracking into irregularly shaped patches. Younger stems may be smoother, initially hairy.

The wood is pinkish to grey-brown, darkening with age and when oiled. It is used as a general-purpose timber, known in cabinet making, for household utensils and dugout canoes. It works well, but is prone to borers. The wood can be polished and varnished, also holds nails well.

The familiar white on green indigenous tree name tags of the Dendrological Society of South Africa, an organisation dedicated to tree science and conservation, are found in many public and private parks, gardens and reserves in South Africa. There are black on yellow tags for exotic species (Erasmus, 2016; Coates Palgrave, 2002; Schmidt, et al, 2002; Grant and Thomas, 2001; Van Wyk and Van Wyk, 1997; Pooley, 1993; http://www.dendro.co.za).