Home » TYPES » Trees » Trichilia emetica subsp. emetica
Back to Category Overview
Total images in all categories: 11,506
Total number of hits on all images: 6,491,795 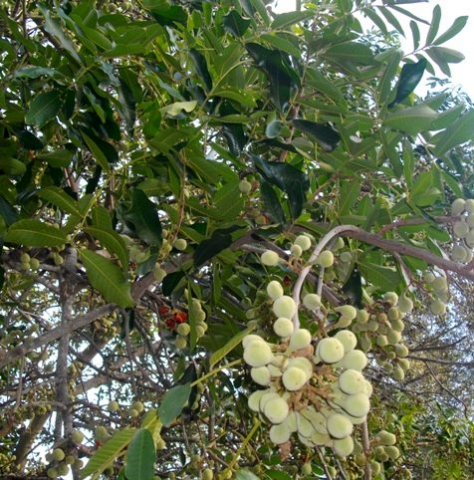 Trichilia emetica subsp. emetica or Natal mahogany and in Afrikaans rooiessenhout, is a medium to large tree reaching heights from 8 m to 25 m (SA Tree List No. 301). It is evergreen or briefly deciduous.

The composite leaves have about five leaflet pairs as well as a terminal one. The leaflets are oblong to elliptic in shape, the base rounded to tapering and the tip rounded or notched. Leaflet margins are entire.

Leaflet surfaces are glossy dark green above, covered in curled hairs below with prominent, cream-coloured midribs. Closely spaced lateral veins ascend in parallel to the margins where they curve forward slightly.

Leaf petioles are long and velvety, up to 12 cm, while the leaflet petiolules are short and thick. Leaflet dimensions are usually around 12 cm long and 5,5 cm wide.

The subspecies distribution is in northeastern South Africa, in Limpopo, Mpumalanga and KwaZulu-Natal; also in tropical east Africa. Only T. emetica subsp. emetica occurs as far south as South Africa.

The habitat is riparian and coastal forests or woodland in warm, high rainfall climates. The subspecies is not considered to be threatened in its habitat early in the twenty first century (Coates Palgrave, 2002; Schmidt, et al, 2002; http://redlist.sanbi.org).