Home » TYPES » Shrubs » Gossypium herbaceum subsp. africanum
Back to Category Overview
Total images in all categories: 12,091
Total number of hits on all images: 7,393,252 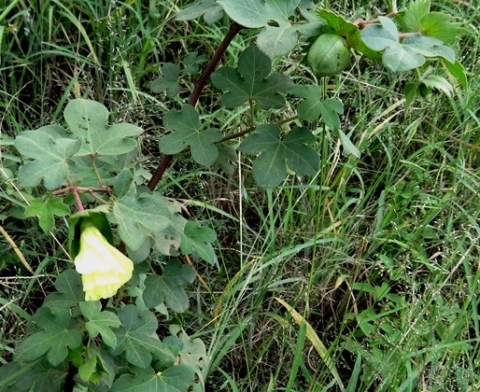 Gossypium herbaceum subsp. africanum, commonly known as wild cotton, is a scrambling or straggly, deciduous shrub reaching 1,5 m in height and spreading. There are about 39 species in the cotton-producing genus worldwide, three of which occur in southern Africa, all three of them in Namibia, one in South Africa.

Horticultural selection, breeding and cultivation of Gossypium plants (they belong to the Malvaceae family) have yielded the commercial cotton originating from this genus. G. hirsutum has become the main source of used cotton; Gossypium is an ancient name for cotton.

The species distribution in South Africa is in the northeast of the country, in northern KwaZulu-Natal, Mpumalanga and Limpopo, apart from widespread occurrence in Africa and Asia.