Home » TYPES » Shrubs » Gomphostigma virgatum
Back to Category Overview
Total images in all categories: 12,086
Total number of hits on all images: 7,381,108 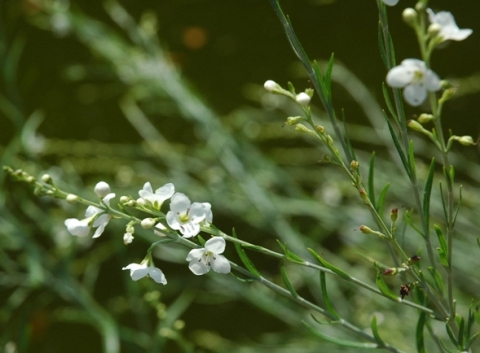 Gomphostigma virgatum, the river star or in Afrikaans otterbossie (little otter bush), is a shrub of more than 2 m. It has erect, flexible, silvery stems and small, narrow, opposite leaves.

The flowers are white, growing in short racemes. The word meaning club-shaped, referring to the stigma of the flower. Flowering occurs in summer and autumn.

The distribution is widespread in southern Africa and registered in the veld of all nine South African provinces. The plant grows by rivers, sometimes in water. The species is not considered to be threatened in its habitat early in the twenty first century.

There are two species of Gomphostigma. The other one is a South African endemic, G. incomptum, found inland in the Western Cape and in the Northern Cape (Manning, 2009; www.plantzafrica.com; http://redlist.sanbi.org).