Home » TYPES » Shrubs » Glumicalyx montanus
Back to Category Overview
Total images in all categories: 12,068
Total number of hits on all images: 7,363,066 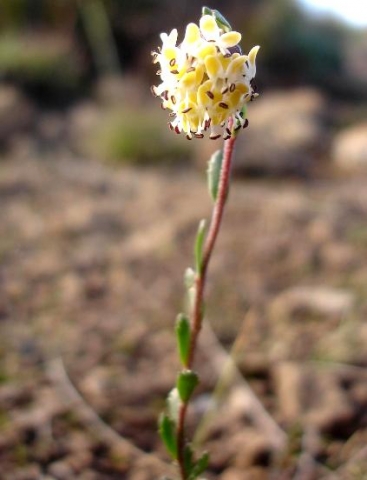 Glumicalyx montanus is a small shrub that grows erect stems from a woody rootstock, a suffrutex. The upper stems have whitish hairs pointing downwards; the lower stems are woody and brown. The leaves are alternate, sessile, i.e. stalkless and well spaced on the reddish upper stem visible in the photo, but densely leafy and opposite lower down on the plant. The leaves are simple, obovate with rounded or obtusely angled tips.

The flowers of G. montanus are produced in dense, rounded, head-like spikes at stem tips. The five petal lobes are obovate with rounded tips. They are creamy yellow here, but may also be slightly greenish. The anthers are dark in this species, well exserted.

The distribution of the species is widespread in South African provinces of KwaZulu-Natal, the Eastern Cape and the Free State, always close to the Lesotho border in the Drakensberg area, growing in grassland at higher elevations. The plant is common in Lesotho. The species is not considered to be threatened in its habitat early in the twenty first century (JSTOR; http://redlist.sanbi.org).