Home » TYPES » Shrubs » Duvernoia aconitiflora
Back to Category Overview
Total images in all categories: 9,428
Total number of hits on all images: 4,236,371 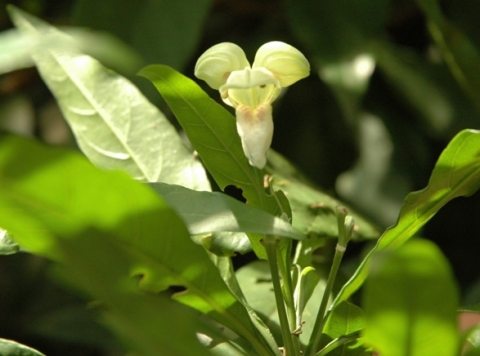 Duvernoia aconitiflora is an evergreen shrub of up to 3 m (SA Tree List No. 681.2). It is one of but two species in its genus which belongs within the Acanthaceae family.

The opposite leaves are oblong to lanceolate and hairless along the green young stems. They become about 15 cm long.

The flowers are borne in terminal spikes of up to seven flowers. The flower is two lipped, white or cream with mauve markings on the lower lip. Flowering occurs in autumn. The fruit is a club-shaped capsule that dehisces explosively in releasing its seeds, bringing the plant the common name of lemon pistol bush.

This plant grows along rivers or forest margins in the Lebombo Mountains of Limpopo and Mpumalanga, also in northern KwaZulu-Natal. The species is not considered to be threatened in its habitat early in the twenty first century.

The plant is considered a good garden option in warmer climates away from frost (Coates Palgrave, 2002; www.kartuz.com; www.redlist.sanbi.org).