Home » GENERA I-L » Justicia » Justicia cuneata
Back to Category Overview
Total images in all categories: 11,632
Total number of hits on all images: 6,749,225 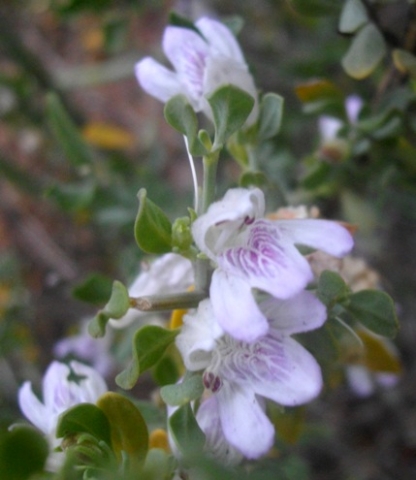 Justicia cuneata, commonly known as rhebuckbush or in Afrikaans bloubos (blue bush), is a rigid, sprawling to rounded shrublet reaching heights between 20 cm and 60 cm. Its grey-green leaves are opposite and variably elliptic, tapering to pointed tips. Upper stems are sometimes sparsely leaved. Young stems may be olive green, old ones whitish, woody and brittle.

The creamy white flowers are two-lipped with two spreading lateral lobes on the lower lip, oblong in shape with rounded tips. This broad central lobe of the lower lip has undulations coinciding with obliquely spreading, parallel veins that are white. There is pinkish-purple colouring on this lobe between the white veins on the specimen in picture. Two large dark anthers are positioned together under the hooded upper lip, or veered to the side. Flowering commences in late winter through spring.

The plant in picture may be J. cuneata subsp. cuneata. It was photographed in the Rooiberg during October.

The shrub occurs in sandy or loamy soils of karoid slopes from Namaqualand to the Eastern Cape. It is not considered to be threatened in its habitat early in the twenty first century (Vlok and Schutte-Vlok, 2010; Bond and Goldblatt, 1984; iSpot; www.redlist.sanbi.org).