Home » GENERA P » Pelargonium » Pelargonium
Back to Category Overview
Total images in all categories: 12,081
Total number of hits on all images: 7,379,058 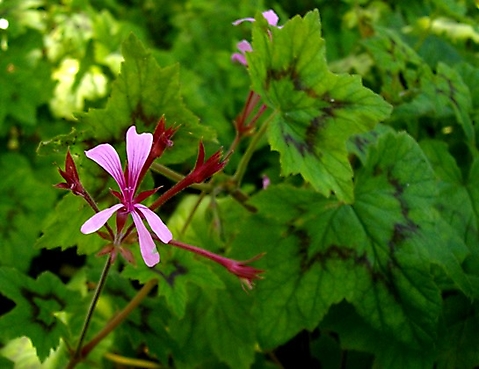 Pelargonium is a large genus in the Geraniaceae family of flowering plants. Its species range from shrubs and stemless geophytes to scramblers, climbers and herbs, also some annuals.

The erect or decumbent plant stems are mostly herbaceous, but some are woody, succulent, sticky, hairy or retaining old petioles or spine-like stipules.

The usually stalked Pelargonium leaves are alternate, ranging from simple with entire margins, to much dissected or compound forms, sometimes changing shape with age within a species as different tissue types play roles at different phases in development and appearance. The leaves are usually aromatic and hairy, often glandular.

The inflorescence is a pseudo-umbel, varying widely in the number of flowers borne. Peduncles vary in length, involucral bracts occur. There is a floral tube (hypanthium) present at the base of every flower. This tube includes a nectar-bearing tube or spur, fused with the pedicel below and opening into the base of the upper sepal (for delivering nectar). The base of the floral tube is often thickened.

There are five sepals, joined at the base, sometimes with reflexed tips. The petals are usually five, sometimes four and rarely two. The upper (posterior) pair is present throughout, the lower (anterior) ones reducing by one or absent.

Ten stamens occur in each flower, joined at the base. From two to seven of them are fertile. The anther attaches at its back to the filament.

The ovary is positioned on a raised platform. It has five lobes corresponding to five locules that each contains two ovules. The style varies in length. It ends in five reflexed, thread-like stigmas.

Each single-seeded fruit tapers from tip to base, ending in a spirally twisted awn. The seeds are oblong to ovoid.

There are about 270 Pelargonium species, 219 of them found in southern Africa, mostly the Western Cape. The rest occur in Africa, Asia, Australia, New Zealand and some Indian Ocean and Pacific islands, including Madagascar.