Home » GENERA P » Pelargonium » Pelargonium alchemilloides from the Cape to Ethiopia
Back to Category Overview
Total images in all categories: 12,081
Total number of hits on all images: 7,379,218

Pelargonium alchemilloides from the Cape to Ethiopia 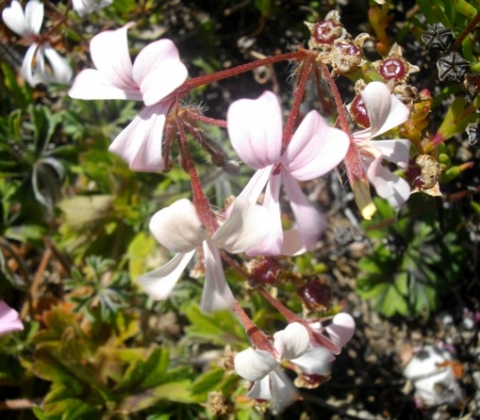 As may be expected of plants belonging to a species that is found from the Cape Peninsula to Ethiopia, their looks may vary considerably over such a distribution. A Kenyan flower photo of Pelargonium alchemilloides published by Blundell (1987) shows more flowers in the umbel than usually seen in South Africa; up to sixteen have been recorded.

White, pink or even dark red forms of the flower have been seen there, sometimes with broader petals, obovate in shape with rounded tips. The flowers in picture show some very fine lines on the lower parts of the upper pair of petals.

In North Africa the plant grows in savannah, on mountains and at forest margins to altitudes of 2800m. This flower, however, was seen in the south, close to the sea at Onrus during October. Some mesemb fruits, probably from an Erepsia species are ripening right next to it (Vlok and Schutte-Vlok, 2010; Blundell, 1987).