Home » TYPES » Mesembs » Titanopsis calcarea
Back to Category Overview
Total images in all categories: 10,596
Total number of hits on all images: 5,234,525 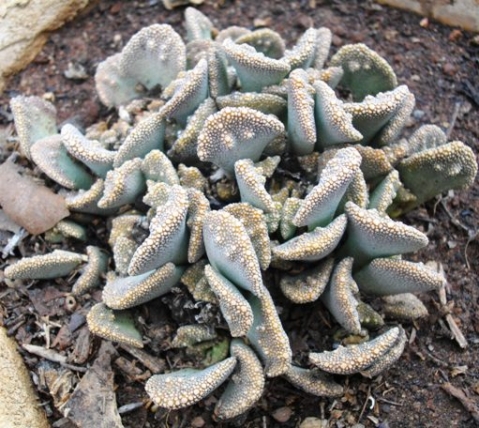 The leaf tips seen in this photo display the warty ridges, definitive feature of the kalkvygies of the genus. The warts are varied in shape and size on both leaves and sepals.

This plant is found in the east of the Northern Cape, the western Free State and the southwest of North West(!), particularly the northern Karoo west of Kimberley. The habitat is limestone outcrops in arid conditions subject to extreme temperatures. The species is not considered to be threatened in its habitat early in the twenty first century.

There are just two species of these kalkvygies (chalk mesembs) in the genus Titanopsis. The other one, T. hugo-schlechteri grows in a partly overlapping distribution and in Namibia. Titanos means chalk and -opsis means appearance. The chalk connection comes from the raised calcium-filled warts on the leaf surfaces (Smith, et al, 1998; www.cactus-art.biz; http://redlist.sanbi.org).