Home » TYPES » Mesembs » Frithia humilis
Back to Category Overview
Total images in all categories: 11,506
Total number of hits on all images: 6,492,049 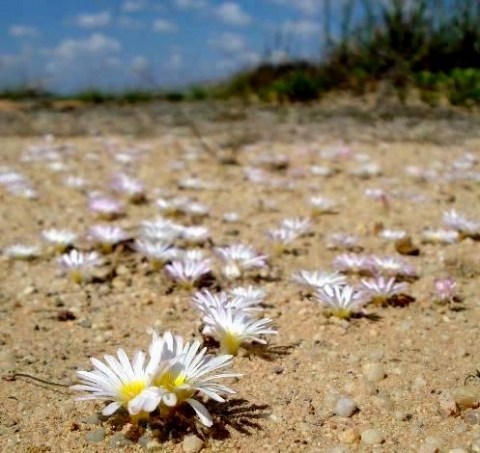 The leaves are topped with translucent windows for allowing sunlight to enter and photosynthesise in cells below the surface, the chlorophyll only occurring lower down on the inside. These windows are less than 3 mm in diameter. They have raggedly irregular margins and are somewhat concave on top.

The genus of only two species is unrelated to the similar Fenestraria genus occurring far to the west in the arid conditions of Namaqualand and Namibia.

The Frithia plants are not buried, although their thickened roots may function in contractile manner, drawing the leaves down for escaping some of the hard, seasonal conditions, if it isn’t the stems that shrink when losing moisture. The leaf body, likened to a tiny elephant’s foot, has glittering water cells in rows upon the slightly rough skin of its side walls.

The F. humilis distribution in Gauteng and Mpumalanga is restricted to the eastern end of the Magaliesberg, continuing eastwards to Bronkhorstspruit and Middelburg.

The habitat is shallow, sandy and gravelly quartzite slopes and flats or large, flat, rock plates of coarse sandstone sediments characteristic of the Magaliesberg. Not too many Aizoaceae genera grow entirely in the summer rainfall region of South Africa, like Frithia. The species is considered to be endangered in its habitat early in the twenty first century due to trampling and overgrazing by stock, alien plant invasion and horticultural harvesting (Frandsen, 2017; Leistner, (Ed.), 2000; Smith, et al, 1998; Herre, 1971; iNaturalist; http://pza.sanbi.org; http://redlist.sanbi.org).