Home » TYPES » Mesembs » Fenestraria rhopalophylla subsp. aurantiaca
Back to Category Overview
Total images in all categories: 11,506
Total number of hits on all images: 6,499,107 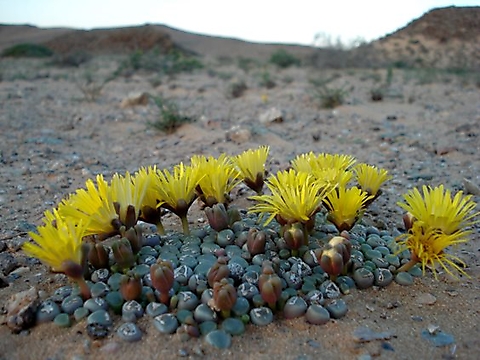 Fenestraria rhopalophylla subsp. aurantiaca, commonly known as baby toes or as a window plant, is a dwarf leaf succulent, one of only two subspecies in their monotypic genus. The other subspecies is subsp. rhopalophylla, bearing smaller, white flowers and only occurring on the Namibian coast between the Gariep River and Lüderitz.

The subspecies distribution in South Africa is restricted to the far northwest of the Northern Cape in coastal sandveld as far south as Kleinzee.

The plants grow largely submerged in sandy places or gravelly sand. It is not considered to be threatened in its habitat early in the twenty first century (Grenier, 2019; Frandsen, 2017; Williamson, 2010; Smith, et al, 1998; http://redlist.sanbi.org).