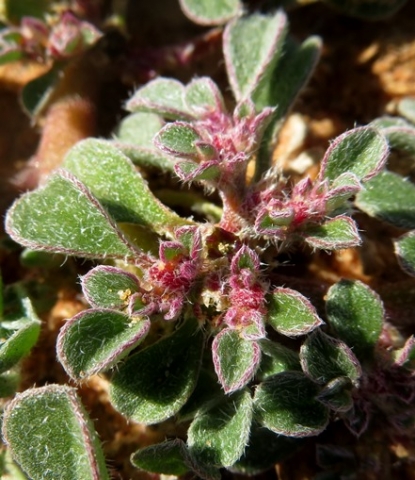 Galenia is a genus of spreading or erect, mostly perennial shrublets, some shrubs and a few herbs, usually woody at the base. They are unusual looking members of the Aizoaceae family that is notable for holding many surprising shapes.

The leaves are simple, either opposite or alternate, mostly obovate and without stipules.

The bisexual flowers grow from leaf axils with or without stalks, the perianths four- or five-lobed. There are eight or ten stamens growing in pairs opposite the segments. The superior ovaries have from two to five locules. The fruits are small capsules that open from water contact when ripe. The seeds are compressed, about kidney-shaped or spherical.

Galenia is similar to Tetragonia, also in Aizoaceae. The latter genus has much larger seeds, characterised by often conspicuous wings on their capsules

Galenia comprises more than 30 species, all endemic to southern Africa to tropical Africa. Several of them are considered as important fodder plants for game and stock in the region.

The plant in picture has spoon-shaped leaves tapering gradually at the base while rounded or slightly pointed at the tips. Red margins and sparse, long hairs on the blades are notable. Flowering was imminent when the photo was taken in August near Vanrhynsdorp.