Home » TYPES » Mesembs » Cephalophyllum rigidum
Back to Category Overview
Total images in all categories: 11,110
Total number of hits on all images: 5,778,056 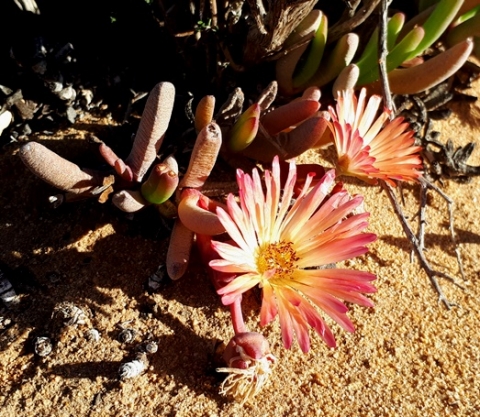 Cephalophyllum rigidum is a compact succulent perennial growing prostrate branches. The succulent leaves grow in opposite pairs, somewhat triangular in cross-section from a deep keel, but slightly rounded towards being sub-cylindrical.

The stalked flowers grow solitary, the petals spreading, angling up over the five sepals. The petals in picture have pale colouring near the base, darkening into coppery and pinkish purple towards their rounded tips. A large cluster of stamens in the centre bears tiny, dark anthers. Below them, the feathery stigmas are surrounded by nectar glands.

These flowers were photographed in August, the plant growing in the open in sandy soil. The capsules have many locules with big covering bodies, opening during rain and releasing the small brown seeds.

The species, a South African endemic, is found in the Northern Cape. It is not considered to be threatened in its habitat early in the twenty first century (Smith, et al, 1998; iNaturalist; http://redlist.sanbi.org).