Home » GENERA C » Cephalophyllum » Cephalophyllum pillansii flowers at the ready
Back to Category Overview
Total images in all categories: 11,656
Total number of hits on all images: 6,771,209

Cephalophyllum pillansii flowers at the ready 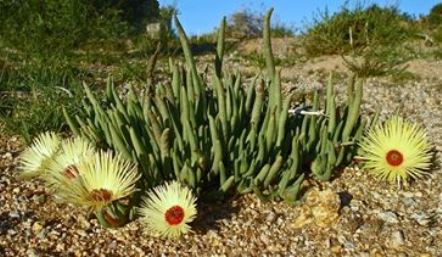 This Cephalophyllum pillansii plant has much leaf length variation in its mat of erect, pale, blue-green leaves.

Its flowers are produced on upcurving stalks around the perimeter of the leafy mat. The flowers are near the ground, angled out and up like satellite dishes, transmitting a visible message of food prospects to insects much closer than any passing satellite.

While satellite dishes serve to receive and transmit radio waves, many floral dishes transmit attractive fragrances for prompting pollinators with appropriate olfactory sense. It is not known whether any aromatic facility is present in Cephalophyllum flowers.

The two-tone flowers of pale petals and red-brown stamens do, however, have strong visual impact on many kinds of eyes active in their ecological microcosm (Frandsen, 2017; Herre, 1971).