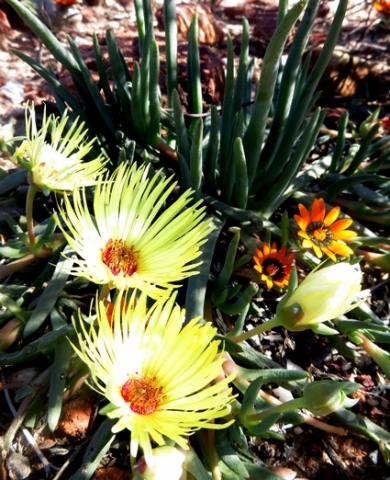 The pointed, succulent sepals can be seen spreading away from the corolla of the opening flowers in picture, still converging over the bud.

The species distribution is mainly in the west of the Northern Cape, in Namaqualand and southwards into the Western Cape as far as Vanrhynsdorp. This one was seen in August west of Springbok.

The plants grow on sandy flats in arid to semi-arid winter rainfall conditions. The species is not considered to be threatened in its habitat early in the twenty first century.

The plant resembles C. tricolorum that occurs in the Western Cape, possibly with larger flower centres. There are about 33 species of Cephalophyllum, all in the west of southern Africa, in the Western Cape, Northern Cape and Namibia (Smith, et al, 1998; Herre, 1971; iNaturalist; http://redlist.sanbi.org).