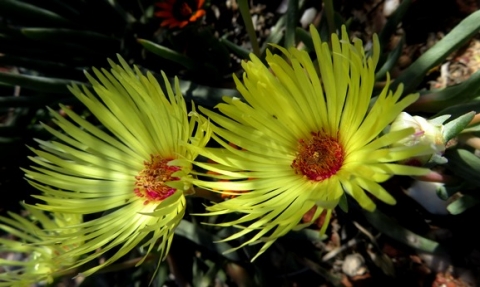 Up to three flowers of Cephalophyllum pillansii may grow at a stem-tip on longish pedicels without bracts.

Two or three whorls of thin, pointed petals angle slightly up around a dark pinkish red flower centre. Many short, erect stamens bearing brownish anthers are present, not converging into a central cone. Flowers become about 6,5 cm in diameter.

The fruit capsules have well-developed valve wings and large closing bodies. There are covering membranes that bulge.

The flowers open in late morning to noon sunlight and close before dusk. Flowers are seen at least from winter to summer, probably less frequently later in the season (Smith, et al, 1998; Herre, 1971; iNaturalist).