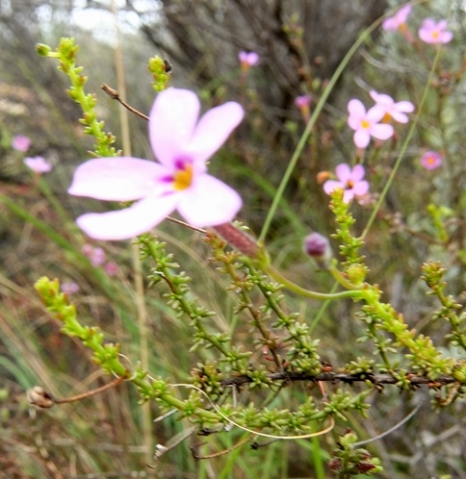 Jamesbrittenia tortuosa, previously known as Sutera tortuosa and Lyperia atropurpurea respectively at different times in its taxonomic peregrinations, is a woody shrub that reaches heights from 20 cm to 50 cm in height.

Its leaves vary in size up to 10 mm long and 3 mm wide. They grow in small clusters, dull dark green to yellow-green in colour.

The flowers grow solitary from leaf axils near stem tips. The sepals are small, the corolla tube is hairy on the outside with a notable kink before the mouth. The corollas vary from white to pink or mauve in colour, but always with some dark mauve at the mouth, a short, central streak at the base of each of the five square-tipped lobes. Yellow is sometimes seen inside the corolla throat. Flowering happens in spring to mid-autumn, mostly after rain.

The species distribution is in the east of the Western Province and the west of the Eastern Province, from fairly near the coast to the Little Karoo and into the south of the Great Karoo near Jansenville. This plant was seen in the Kouga east of Uniondale.

Its typical habitat is dry slopes and lowland areas among varied vegetation in clay or loam soils. The species is not considered to be threatened in its habitat early in the twenty first century (Vlok and Schutte-Vlok, 2010; Bond and Goldblatt, 1984; iSpot; www.redlist.sanbi.org).