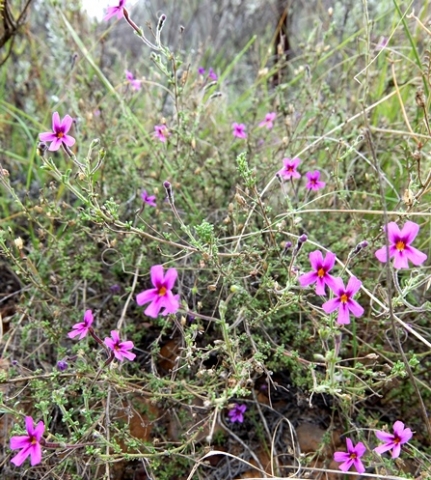 Jamesbrittenia tenuifolia is a soft shrublet with thin branches growing to 60 cm in height. It has a covering of gland-tipped hairs on stems and leaves.

The species distribution is coastal in the Eastern Cape around Humansdorp and to the west into the southern Cape. The photo was taken in the Bo-Kouga east of Uniondale.

The plant grows in scrub on sandy and rocky slopes or dunes. The plant is not considered to be threatened in its habitat early in the twenty first century.

Some earlier names of the plant include Sutera atrocaerulea and Lyperia tenuifolia (Manning, 2007; Bond and Goldblatt, 1984; www.redlist.sanbi.org).