Home » GENERA P » Portulacaria » Portulacaria armiana
Back to Category Overview
Total images in all categories: 12,058
Total number of hits on all images: 7,353,550 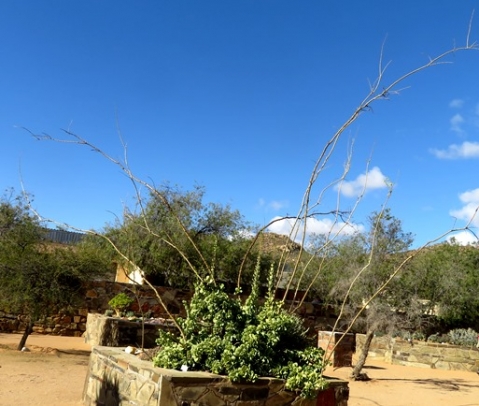 Previous
Image 6 of 14
Next

Portulacaria armiana, commonly known as the whipstick-porkbush, in Afrikaans as the langlootspekboom (long shoot porkbush) and botanically earlier as Ceraria armiana, is a densely branched, woody and succulent shrub reaching heights around 1,5 m, excluding its flower stems. The drought tolerant, leafy bush spreads on the ground to a diameter of more than 1 m. Its roots are fibrous.

The species is found on a few hills on both sides of the Gariep River in the north of the Richtersveld and the south of Namibia in arid, succulent Karoo conditions. A few small but dominant stands of the plant occur on rocky, north-facing slopes of mica-schist hills and granite outcrops in vegetation called Noms Mountain Desert or the Gariep Desert Bioregion. This plant was seen in the Hester Malan Succulent Garden of the Goegap Nature Reserve during August.

The climate of the region where thse plants grow includes very hot summer periods to cool ones during the onset of fog from the Atlantic Ocean. Rainfall is 50 mm to 100 mm per annum, received in winter and quickly drained in the sandy soil. The mist augments the moisture received by the plants that grow here. P. armiana is considered vulnerable in its habitat early in the twenty first century due to destruction of its naturally restricted habitat from particularly mining and overgrazing (Williamson, 2010; Frandsen, 2017; iNaturalist; Wikipedia; http://pza.sanbi.org; http://redlist.sanbi.org).