Home » GENERA P » Portulacaria » Portulacaria afra, a useful plant
Back to Category Overview
Total images in all categories: 12,058
Total number of hits on all images: 7,353,534 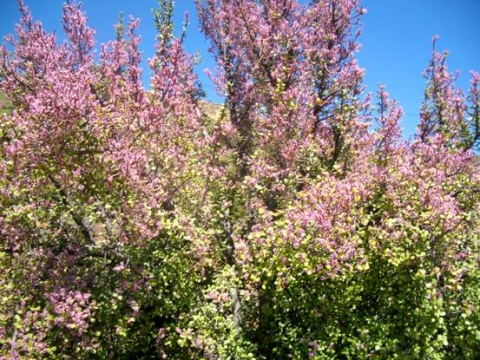 Previous
Image 5 of 14
Next

The position of Portulacaria afra in the estimation of the public has undergone a positive adjustment since carbon sequestration has become an issue. The plant makes a notable contribution in binding atmospheric carbon. This capability lies in its alternative growth method during hard times when the plant remains a carbon sponge, while many other plants go into rest mode caused by the unfavourable conditions.

Hedges of this plant, trimmed into various shapes or growing naturally are seen in many places. Xeriscaped, container, bonsai and other gardens are enhanced by this evergreen shrub. Natural hardiness and a tendency to bind soil make it useful in checking erosion on slopes.

The plant is variably palatable, sometimes constituting an important fodder component, also for tortoises. Plants growing on northerly or easterly slopes are browsed more than those on southerly slopes, especially where they grow in shale or where the soil tends to be sour.

In the Addo Elephant National Park the spekboom serves as elephant food. An elephant browses the shrub from the top, allowing vegetative propagation to continue from retained low branches. In farming regions goats will deplete lower branches, leaving it to flowers at the top to form seed when conditions allow.

People may still make snuff of the dried leaves.

The leaves are edible, sometimes eaten raw as a spinach, while they are also sometimes eaten by women to increase lactation (Coates Palgrave, 2002; Vlok and Schutte-Vlok, 2010; Smith and Crouch, 2009; Shearing and Van Heerden, 2008; www.plantzafrica.com).